There are four inscriptions associated with Col. Colin Mackenzie (1754-1821) on the Isle of Lewis. I have written about Mackenzie in two earlier posts (Part 1, Part 2) and this short piece complements the second.

Colin Mackenzie was born in Stornoway but the house in which he was born no longer exists. Instead, an inscription marks the site of this house. 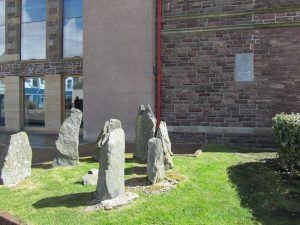 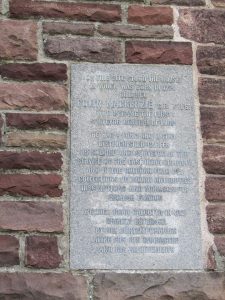 On this site stood the house
in which was born in 1754
Colonel
Colin Mackenzie C.B. F.R.S.
who became the first
Surveyor General of India
He had a long and highly
distinguished career
as soldier and surveyor in the
service of the East India Company
and in the cultural field his
collections of Indian antiquities
inscriptions and manuscripts
became famous
He died near Calcutta in 1821
greatly esteemed
by his contemporaries
alike for his character
and his achievements

In 1823, Mary Mackenzie, the sister of Colin Mackenzie, built a family mausoleum in the churchyard of St Columba’s (Ui) Church, in the eastern part of the Isle of Lewis. Mary is buried there alongside her parents, Murdoch and Barbara Mackenzie, and there are inscriptions dedicated to all three of them. However, Mary also included two further inscriptions for her two brothers who were not buried here: Alexander, who died in Hastings, and Colin, who died in India and is buried in South Park Street Cemetery, Kolkata, where his grave can still be seen.

The photos I include here of the mausoleum and inscriptions were taken when I visited the site at the end of April 2016. I wrote about my visit in an earlier post.

The first inscription you encounter when you enter the mausoleum, is that dedicated to Alexander and Colin. It is placed immediately opposite the entrance. Alexander’s memorial is short and tells us little about his life. In contrast, Colin’s is lengthy and, notably, Mary emphasises his research into ‘the ancient history, literature and antiquities’ of India. At the end of their epitaphs, Mary recalls ‘their many excellent endowments’, suggesting that she used funds from Alexander, as well as Colin, for this purpose. 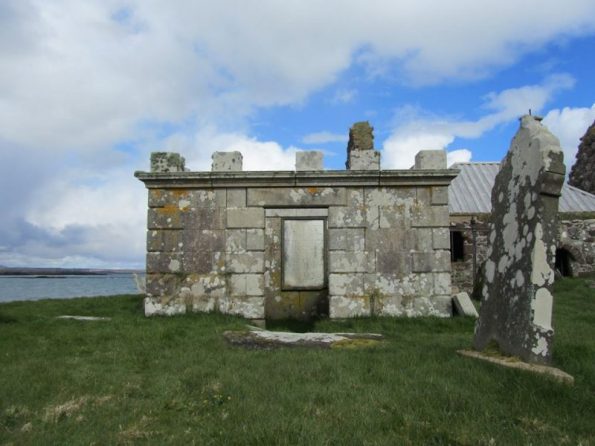 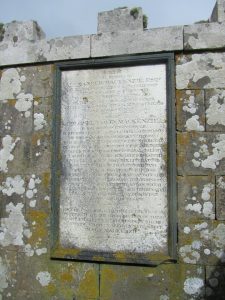 Sacred
to the memory of
Alexander Mackenzie, Esqr.
Eldest son of Murdoch Mackenzie Esqr.
Late postmaster of Stornoway.
Who died at Hastings in England
on the 11th Sept. 1810 aged 70 years.
deeply lamented by his numerous friends
and acquaintances
and of
Colonel Colin Mackenzie
of the Madras Engineers C.B.
Surveyor General of all India, second son
of the said Murdoch Mackenzie Esqr.
Who during an active service of nearly 40
years in India was eminently distinguished
not only for his high professional talents
but also for his indefatigable researches
into the ancient history, literature
and antiquities of that interesting
part of the globe by which he has
furnished to the world a mass of valuable
information far surpassing the ordinary
efforts of human industry and in which
arduous pursuit his useful life terminated
at Calcutta on the 8th day of May 1821.
In the 68th year of his age.
This tablet was placed here in the year 1825
to perpetuate the reconnection(?) of their
many excellent endowments by their
surviving and very affectionate sister
Mary Mackenzie

To either side of this central epitaph, are dedications to their parents, Murdoch and Barbara, and to Mary herself. Mary was the last of the family; neither she nor her two siblings had children. It may have been for this reason that she decided to erect such a grand mausoleum to perpetuate the memory of her family, knowing that none after her would do so.

Epitaph of Murdoch and Barbara Mackenzie: 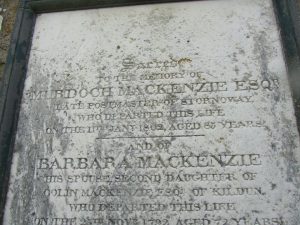 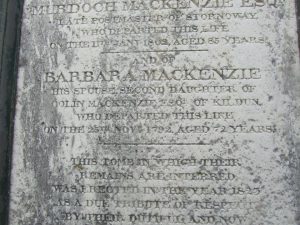 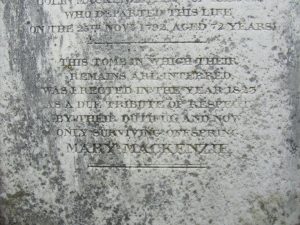 Sacred
to the memory of
MURDOCH MACKENZIE Esqr.
Late postmaster of Stornoway
who departed this life
on the 11th Jany 1802, aged 85 years
and of
BARBARA MACKENZIE
His spouse, second daughter of
Colin Mackenzie Esqr. of Kildun
Who departed this life
on the 25th Novr 1792 aged 72 years
This tomb in which their
remains are interred
was erected in the year 1823
as a due tribute of respect
by their dutiful and now
only surviving offspring
MARY MACKENZIE 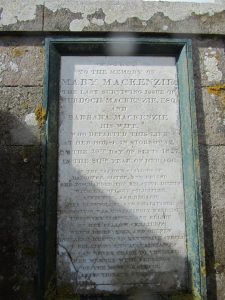 Sacred
to the memory of
Mary Mackenzie
the last surviving issue of
Murdoch Mackenzie, Esqr.
and
Barbara Mackenzie
his wife.
Who departed this life
at her house in stornoway
on the 29th day of Septr. 1827,
in the 80th year of her age.
In the various stations of
daughter, sister, and friend
she discharged the relative duties
with exemplary solicitude,
affection, and regard.
Her benevolent and charitable
disposition was unsparingly exercised
to convey comfort and relief
to her fellow creatures
which deservedly and deeply
endeared her to an extensive circle
of relations and acquaintances
who can never cease to venerate
her memory with feelings
of the most grateful
affectionate remembrance 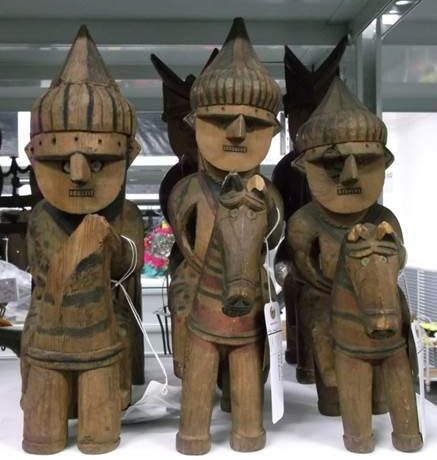 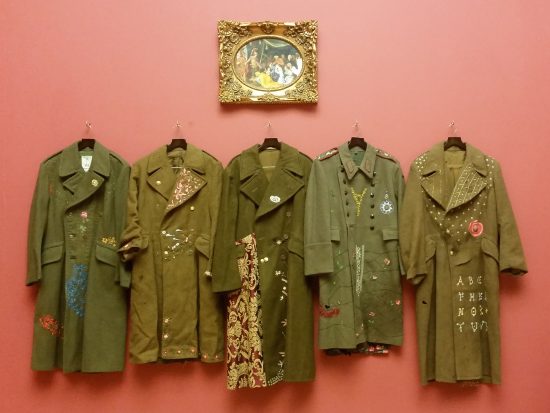 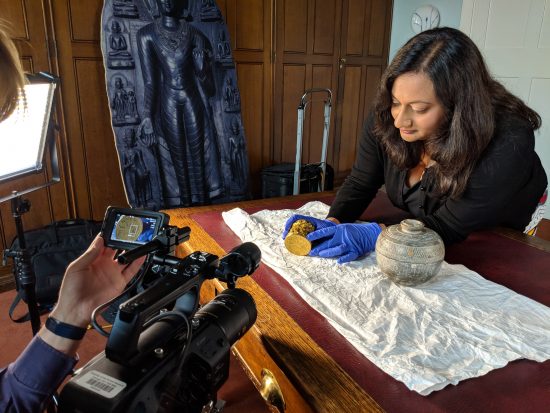 Q&A: How did you become a curator?