I write about three particular projects, listed below, and will gradually add blogposts about the current project I am working on: Manchester Museum South Asia Gallery in partnership with the British Museum. 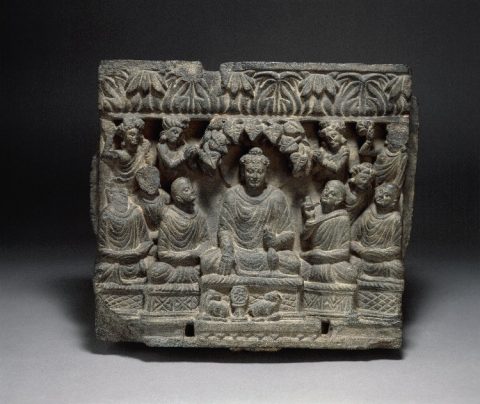 The Buddha’s First Sermon. Image © Trustees of the British Museum

As part of my curatorial work as Tabor Foundation Curator, South Asia Collections in the Department of Asia at the British Museum, I worked on a major capital project: the refurbishment of the museum’s largest gallery, the Joseph Hotung Gallery of China and South Asia. I curated half of the South Asia section of the gallery, which included the ancient to early medieval South Asia sections and a section focusing on Sri Lanka. I am responsible for the narrative, object selection, label-text writing, and the many other integral parts of permanent gallery refurbishment, in these sections. I have, therefore, researched and written about the full range of this material in the British Museum’s collections.

Model gandau made by the Kalash people in Chitra District, Pakistan

When I started my first curatorial role in the Department of Asia at the British Museum, I looked after all of the ethnographic collections from Siberia in the north to Sri Lanka in the south, and from Pakistan in the west to Japan in the east. It was a mammoth remit. At present, in my current post as Tabor Foundation Curator, South Asia Collections, my curatorial purview has changed. I now look after all of the ancient to mediaeval South Asia collections, the South Asia textiles and the majority of the South Asia ethnographic collections, including India, Pakistan, Sri Lanka and the Maldives except for objects from Bangladesh, the Andaman and Nicobar Islands, Bhutan, Nepal, Tibet, prints on paper and photographs. Also, I curate the Siberian ethnographic collections. Yes, Siberia. I recently wrote a brief overview of the collection history of the objects from Sakha (Yakutia) and also co-authored a book on these collections: T. Argounova-Low, A.K. Brown & S. Jansari, Model of a Summer Camp (London: British Museum Press, 2020).

3. The Mackenzie Collections at the British Museum

Since 2009, I have been researching the coins from the vast and wide ranging collections of Col. Colin Mackenzie (1754-1821), the first Surveyor General of India, that are held at the British Museum. I have been fortunate enough to travel to Stornoway on the Isle of Lewis, where he was born, twice. Here, I presented my work alongside that of my colleagues Jennifer Howes and Nick Barnard who have researched his objects, manuscripts and drawings held at the V&A and British Library. In August 2017, the first exhibition focusing on Mackenzie and his collections, to which I contributed, was held at Lews Castle, Stornoway.